The Full week 4 #MFLearn19 page can be found HERE

I am from the UK and it is often pointed out to me by Australian colleagues that this means I talk too fast, too quietly and using too many words. So making a video presentation for the Musical Futures International online course, #MFLearn19 was definitely outside my comfort zone.

I have decided to summarise what I talked about in a series of blog posts to contribute to the #MFLearn19 output that is coming in from teachers across the world as a result of this course that has been expertly created, curated and led by Steve Jackman.

It has been great through this course to revisit some of the core MF pedagogy through #MFLearn19 and also to learn more broadly around the 5 principles of informal learning how they translate into practice and link out into wider research.

It’s not just in the presenter videos where this has been happening. The weekly chats in the Musical Futures Chat Facebook group led by the fabulous Kellee Green, MFI Champion from Queensland Australia, but also through the Music Your Way network of teachers in Canada and from teachers posting on Twitter. These groups are digging deeper into the questions posed by the MF Learn presenters and it is great to get more insights into how MF is used and adapted, as it always has been by teachers 15 years since the original pilots of informal learning first took place. The beauty of it being free and open access is that anyone can take part and the more people that engage with the topics and talk about them, the more buzzy and exciting it will be

I am going to write my blog in 3 parts to try to sum up some of what I discussed in my video as presenter of #MFLearn19, week 4 on the topic of haphazard and holistic learning.

I want to start part 1 with a little Musical Futures history and context and where the term ‘haphazard learning’ first originated, before I get into the topic of holistic learning and differentiation in part 2 and then finish with some questions and a round up of what people have been saying in their blogs and discussions about the topic in part 3.

I know we have people taking this course who are new to Musical Futures and might not have been aware of its origins and the research from which it has grown. And for those of us that have been around for a few years now, it never hurts to revisit our roots now and then.

They put forward a proposal to test on a larger scale some pilot work that Lucy had already been doing some early testing with in some schools in London. The basis of the Herts pilot was to take the approaches that Lucy had identified and researched previously in her book ‘How Popular Musicians Learn’ and explore what would happen if these were applied in the formal music education setting of the school classroom. Lucy’s findings were published in this book, Music, Informal Learning and the School – a new classroom pedagogy and Lucy later went on to look at how a similar approach might work in an instrumental learning situation, with her findings later published in her book Hear, Listen, Play!: How to Free Your Students’ Aural, Improvisation, and Performance Skills.

Back at the start, we were asked to give one class of Y9 students per week to the pilot and given some simple instructions as teachers. We were to hand over the choices about what, how, when and with whom the students would learn and as teachers told to step back, observe, empathise with goals students set for themselves and find ways to support them to achieve these.

Lucy and the research officer and project manager for the pilot, Abigail D’Amore were regular visitors to those lessons, supporting the work, helping us all to reflect on what we had observed. They also built a positive rapport with what was in my case a really challenging year 9 class in a school who had previously had music on a half termly carousel, but for the purposes of this project were the only Y9 in the school who were allowed to have music for an hour a week for the whole year!

As the pilot unfolded, I realised that this approach couldn’t have been further from the way that I learned music myself. I already knew when got my first job in a one-person music department in a very challenging school that they didn’t really want to learn music the way I had been trained through my own music education and on my teaching placements to teach it.

I found I had no experience either musically or through my training as a teacher to know how best to engage these kids with music in school. The opportunity that the Musical Futures Informal Learning pilot gave me to reflect on what was happening week by week, then subsequently as I tried to roll out the approach with other classes eventually became a 10 year mission to relearn how to learn and teach music and one which continues today.

Based on her research into how popular musicians learn, Lucy shaped her findings into 5 characteristics of informal popular music learning practices into 5 principles which were then tested in the classroom. She summarises a longer description of Principle 4 as “engaging in personal often haphazard learning without structured guidance” 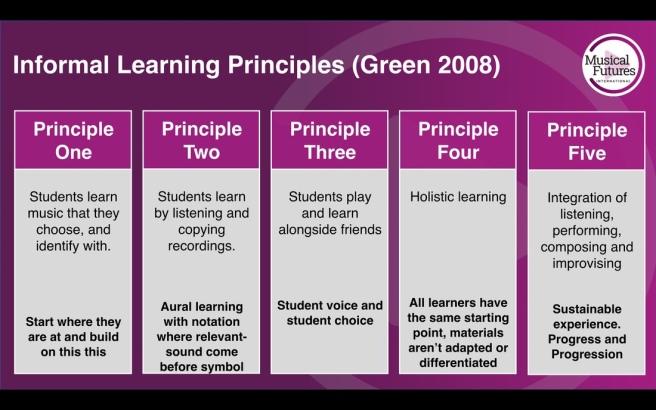 In year 2 of the original pathfinder, we entered a roll-out phase and in those early days we latched onto the phrase ‘haphazard learning’ and used it in our presentations to other teachers.

Based on what we had seen in the classroom we related this to our observations that learning was happening in peaks and troughs, as you would expect really, as opposed to the ideal of students steadily getting better and better at something in a straight ascending line. Something we are expected to aspire to in these days of targets and flight paths and predictions…

We all experienced the week 3 or 4  ‘dip’ with informal learning where suddenly it all seemed like a terrible idea as groups struggled, argued, went backwards in terms of progress. The classroom was chaos, everything was haphazard and it was tempting to stop the whole thing and just give up. But we learned that if we just gave it another week then suddenly groups started to get back on track and things changed for the better.

So when describing this dip, we asked teachers to think about strategies for how they might support students working in groups through the low points of this haphazard learning whilst still maintaining that general ownership of the learning that we had found so motivated and engaged them. We talked about supporting individuals, rather than applying one size fits all help, and how the suggestions for the role of the teacher that had been laid out in the pilots, to watch, step back, empathise, model could result in truly personalised learning experiences in a music classroom and supporting students through to an end point where the journey was more important than the outcome.

It was also easy to describe the noise and chaos of a typical Musical Futures lesson as haphazard, something that you might find in the informal world-look they are all learning at their own pace and finding their own way through! Or as my Musical Futures International colleague Ken Owen often says at workshops “have you ever played in a band?”

So if you attended an early Musical Futures training event or presentation, that’s why you might have seen ‘haphazard learning’ appearing on the slide as principal 4 of the 5 principles of informal learning.

To find out how the focus changed from haphazard to holistic learning in how we now present the 5 principles of informal learning, you will have to check out part 2 of this blog coming soon! Meanwhile, how might you describe Musical Futures lessons in your classroom? What does ‘Haphazard Learning’ look like and where do you look for the really valuable musical learning that takes place when students are given the freedom and choice to work this way in the classroom?