The Full week 4 #MFLearn19 page can be found HERE

In my last blog I talked about how we first started using the term haphazard learning when we presented Lucy Green’s 5 principles of informal learning to teachers in the early years of the roll out of Musical Futures in the UK. So what changed and why in how we now present principle 4 at our workshops?

A few years ago, I had a catch up with Lucy and updated her on some of the work we have been doing at Musical Futures International to build on the original work, first across Australia supported by the Govt in Victoria, into international schools in Asia and Europe and now working with instrumental teachers in China and elsewhere.

As we talked, Lucy said that she regretted using the term haphazard learning. We talked about how it’s not exactly the aim of every teacher to produce a ‘haphazard’ lesson nor is it a term that we might aspire to have appear in lesson observation feedback or student self assessment. How was your lesson today? Yeah well it was a bit haphazard……

Lucy talked to me instead about ‘holistic’ learning with haphazard learning being one natural outcome of this approach in practice. I decided to go back to the literature and then think about this all might work in classroom practice.

Emily Wilson, #MFLearn19 week 5 presenter, found me some references that helped to clarify what holistic learning might mean in the context of informal learning.

So if we take these one at a time:

“approaching whole “real-world” pieces of music, involving finding their own way through the learning rather than using music that has been simplified and structured progressively” (Green & Narita, 2015, p. 305).

I interpret this as being that the teacher has done nothing to the source material or stimulus, all students are given the exact same start point in the case of in at the deep end, a free choice of a piece of music, and more importantly space and time to respond to this in their own way. They are then supported by the teacher in ways that are personalised to the needs of groups and individuals as these needs become apparent.

“the task involved what is known as ‘differentiation by outcome’. In other words, all pupils were set the same task, but it was adaptable to the differing abilities of individuals, not by virtue of being divided up into separate, progressive levels of difficulty, but according to what each individual produced as the outcome” (Green, 2008, p. 187).

This point also acknowledges that students may be able to adapt the materials to their own needs themselves without the need for the teacher to have already made some assumptions and done it for them. Such assumptions might include what the identified ‘progressive levels of difficulty’ in that context are, or which students are capable of doing what. Decisions have sometimes been made before the students even have a chance to begin.

“Differentiation by support and response is often an intuitive part of the teaching process; we tailor our support, including our verbal feedback, according to the individual needs of our students (assessment for learning)”. Learning to Teach Music in the Secondary School (2016, p. 179)

I think music teachers do differentiation by teacher response really well. The nature of music and the way it is often taught in groups or through playing allows us to get to know our students musically. We have the opportunity to give personalised feedback and even if it’s not possible to evidence every last aspect of this, that doesn’t mean it isn’t happening. As musicians we would never get better without that routine of create, play, feedback, rehearse, improve and then go again. So in informal learning, do we really need to be spending time differentiating materials before the students get to access them, or could we be more confident in what we already do well – to guide them and support them to develop their own strategies for differentiation.

I decided to have a look at the teacher forums to see the kinds of strategies for differentiation that were being suggested and whether I could find any examples of holistic learning in there.

What I found got me thinking about differentiation generally in music and how much the pressure to evidence the impact of feedback given with a view to improving attainment has somehow distracted teachers from that last point on the slide – Differentiation by teacher response. The examples on the next 2 slides suggest that much of the work has already been done by the teacher and the limits and assumptions of what students can achieve are already in place before they even start the task. 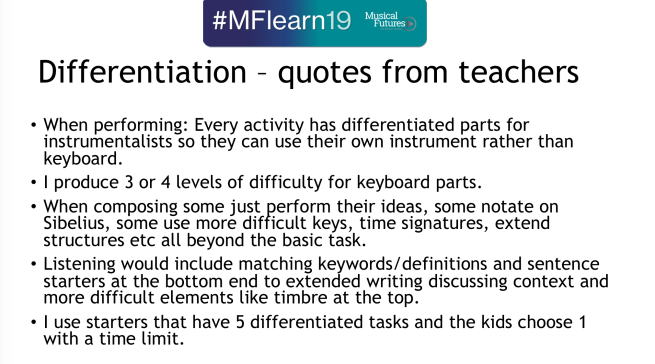 That’s not to say that differentiation by response isn’t happening as well. But what it does is remove that even playing field that Lucy’s idea of holistic learning offers the students. All have the same start point. Materials have not been adapted or differentiated by the teacher in advance.

Now nobody would argue that as the teacher you are responsible for what happens in your lessons, that’s the breadth and depth of content, the management of the space and relationships and the musical progress that the students make. It’s not OK to go and have a cup of tea while the students climb the walls in a practice room and it’s not about watching them struggle and fail.

But there is a balance to be found because as we start to narrow down the choices as our instincts as teachers kick in, we risk losing the opportunity for the students to show what they can do and have help to follow the pathways that they choose for themselves that is so intrinsic in informal learning.

It’s a really hard balance to find. Our instincts as teachers are really strong and there are huge pressures on teachers now to evidence everything, to make sure students make the required progress in visible and measurable ways, to fit into the mould of other subjects that are different to ours. It’s really really hard to step back sometimes and to hand that trust over to our students. The stakes are high.

So in the same way that the term holistic learning could be applied to differentiation, could we also apply this principle to some of the other aspects of Musical Futures that have already been discussed in this course. If it’s not about what we do, rather when and how we do it, in the case of differentiation thats differentiating after they have all started the task from the same start point, what then is the implication for choice of repertoire and choice of friendship groups.

We often hear of teachers offering a choice of pieces to play from a preselected list. Why not offer the preselected list as an option after they have started with a free choice. We hear about teachers getting involved for good reason in the choices about who to work with – why not save those interventions for after students have had a go at choosing their own groups. We know that teachers like to have chord sheets or guidance sheets with step by step suggestions for how to tackle the task available, why not offer those once students have started rather than before. As David Price, original project lead for Musical Futures puts it, “Just in time rather than just in case”.

And also perhaps we should consider whether we are preparing students well enough for informal learning. This diagram (tools, model, use) was designed to show how Musical Futures has expanded across the years to provide opportunities for students to develop some skills or tools (column 1) then undertake whole class activities that model how to use them (column 2) before they are sent off to have a go on their own. This can happen across a project that takes weeks or within one lesson, but it doesn’t rely on worksheets or notation or a quick listen to a piece of music as the star point, rather a shared experience that students are then able to consolidate and build on in groups before contributing again as a whole class if necessary.

Whilst many aspects of the new resource-led Musical Units such as Just Play could be described as more formal in approach, and in contrast to the 5 principles of informal learning, they do accommodate some of the similarities that Lucy acknowledges exist between formal and informal learning.

The following is a description that I like to use to describe how Musical Futures can sit alongside all kinds of different approaches and ideas as a means to engage students in classroom music before it can lead onto other and different things,

Music starts from a practical, hands on, music making session from which you can then build on the student motivation and enthusiasm for the subject and deliver really important understanding, skills, knowledge and hopefully a lifelong love of music.

Leading Informal learning as a teacher takes practice. It is never the same, sometimes it works and sometimes it doesn’t. Its greatest strength – handing over the choices to students can also be its greatest challenge – how to support them once they have made those choices. But what it does do is to build trust. It makes us question ourselves as teachers and as musicians and challenges us to find solutions in collaboration with our students.

But it’s well worth giving it a go. You can learn so much about how you teach and how your students learn. Huge thanks to Steve Jackman and Musical Futures International for organising and running #MFLearn19 to give us this chance to be part of a global community of music educators reflecting on informal learning 15 years on from the original pilots.